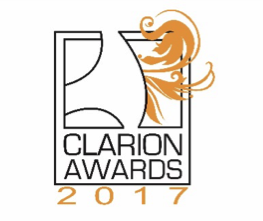 Joanne Gerstner, Sue Voyles, Nicole Scheffler and Kathleen Norton-Schock from the Detroit Chapter are among the 2017 Clarion Winners.

Gerstner’s new book, “Back in the Game: Why Concussion Does Not Have to End Your Athletic Career,” won in the nonfiction, non-technical category.

Voyles, president of Logos Communications, took top honors in the Special Promotion category for the “Safe Ride Program,” a PR campaign for her client, Christensen Law.

Scheffler and Norton-Schock, Diva Tech Talk co-founders, won is the Radio category for both best Interview Program and Women’s Issues coverage with their Women in Technology podcasts.

To qualify, more than half of an entry must have been published, broadcast or implemented in the previous year. By completing the online entry forms and uploading any supporting materials, entries can be submitted in as little as 15 minutes. Visit the Clarion website for further details.